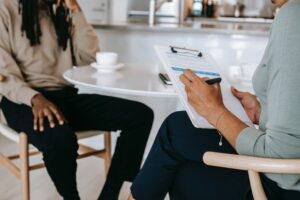 Implicit or unconscious bias refers to attitudes we have but are unaware of about people and the stereotypes we associate with them. They constitute our preferences or aversions, often around — but not limited to —race or ethnicity, and are formed from an accumulation of experiences and education. They can show up in ways that may not seem like racism, but actually are.

Many people say or do subtly racist things based on assumptions they don’t even realize they are making. These verbal, behavioral or environmental slights are called microaggressions. They happen, intentionally or unintentionally, because we tend to view another person’s experience through the lens of our own perspective. That, in itself, is normal and common, but it becomes problematic when we remain unwilling to acknowledge that we have such biases and don’t make the effort to overcome them.

The difficulties surrounding implicit bias can be especially troubling for someone seeking therapy. Therapists want to help people, but if they are unconsciously dismissive of or insensitive to the idea that race plays a part in a client’s situation (focusing on other explanations or solutions that don’t address race) they will not be effective in resolving that client’s issues.

Similarly, clients are not well served when therapists make broad assumptions about their health narrative based on a particular identity or don’t consider cultural differences that may affect a client’s ability to follow through with a prescribed intervention.

“Our systems were formatted to benefit certain people but can be harmful to people who don’t fit that mold. They can wind up ignored or treated incorrectly,” said Leonard Torres, LPCC, MFTC, a therapist at Maria Droste Counseling Center.

A 2016 study published in the Journal of Health and Social Behavior found that voice-over actors attempting to schedule therapy appointments were significantly less successful when using names considered racially distinctive. A second study that year at the University of Maryland found similar results. Those attempting to schedule appointments using names like “Amy” and “Allison” received more appointment invitations in response to their voicemail messages than those using names like “Latoya” or “Lakisha.”

Be proactive when choosing a therapist

The first hurdle for some clients may be getting past their distrust and their belief that therapy is not for them. How can you be sure that the therapist you choose will create a safe space to address your issues, particularly if they involve the impacts of racism or other types of oppression?

Leonard offered these tips when choosing a therapist.

What to watch for during therapy sessions

How does the therapist discuss issues of racial trauma both in a global sense and in terms of your personal experience? Be aware of these potential red flags.

Leonard acknowledged that diversity inclusion is happening more. “It’s important for the therapist to validate your experience. Therapists must use their chosen modality to relate to the client’s whole identity and not give a cookie-cutter response. We are individuals separate from our identities but, as therapists, we must look at the intersection of problems and identities. Sometimes they are connected, but not always,” he said. “I think it’s our role to understand systemic issues and be prepared for a client to relate their problem to a larger issue. Ultimately our clients will discuss what they feel is relevant to their experience.”

******Thank you to Maria Droste therapist, Leonard Torres, for contributions to this blog.******